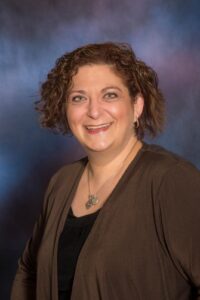 Rabbi Jennifer Weiner was ordained at Hebrew Union College-Jewish Institute of Religion (HUC-JIR) in 1996.  She is a graduate of Barnard College of Columbia University

(1990).  Rabbi Weiner received a Masters of Jewish Education from HUC-JIR’s Executive Masters program in 2020 and her Doctor of Divinity from HUC-JIR after serving the Jewish community for 25-years.

Rabbi Weiner’s rabbinate has long been focused on social justice and social action. She grew up going to protests and on marches and was a rabbinic legislative assistant at the Religious Action Center for Reform Judaism in Washington, D.C. during her last summer of seminary.

Rabbi Weiner has also been involved with outreach to the greater interfaith community. Previous involvement includes Religious Coalition for Reproductive Choice Religious Leadership committee, SERVE, Inc., and various interfaith ministerial alliances.  She is a founding member of the Women’s Interfaith Ministerial group of Prince William County. Other professional organizations include being a member of the Interim Ministerial Alliance, the Association of Reform Jewish Educators and the Washington Board of Rabbis in Washington, D.C.

She has served congregations in Louisiana, Nevada, New York, Virginia, Maryland, and Hawai’i.

She is the winner of the First Annual ARZA Prize in Educational Programming about Israel and the Adler Community Service Prize for her work on behalf of the women and children of Bosnia from HUC-JIR.  She was awarded the Prince William County Human Rights Award for Interfaith work involving Holocaust education and community services in December 2005.

Rabbi Weiner looks forward to being a part of the CKAF community interacting with our members for life-cycles, learning opportunities, spiritual experiences, and interfaith programming.

Rabbi Jennifer Weiner is married to Jeffrey Sachs. They have two children, Aaron and Micah, and two dogs named Ruby and Oliver.

Eric Dubbin has been singing at Kol Ami since its inception and has also enjoyed teaching music at our Religious School. He grew up singing Jewish music for the youth choir of his home synagogue (Temple Beth Am in Miami, Florida) and at URJ Camp Coleman in Cleveland, Georgia. Eric has lived in Frederick County since the late ‘90s with his wife Susan and their children Kellianne, Ricky, and Justin. He works for the FDA’s Center for Veterinary Medicine as an executive coach and has practiced veterinary medicine on animals large and small since 1988. His passions include his family and their animals, playing guitar, and being outside. Contact Eric at: soloist@kolamifrederick.org.